“Our goal should be to live life in radical amazement… Get up in the morning and look at the world in a way that takes nothing for granted. Everything is phenomenal; everything is incredible; never treat life casually. To be spiritual is to be amazed.” —Abraham Joshua Heschel

At Ohev Shalom, we are committed to the Jewish principle of Hiddur Mitzvah, which instructs us to “beautify the commandment.”  Our goal is to maintain a beautiful space in which to practice Judaism, to learn and to pray.  As one of our congregants, artist Elsa Wachs states, “Hiddur Mitzvah is “the poetry of Jewish life.”’  The ritual objects within our space enhance the experience of being in the setting, and help us deepen our appreciation of the purpose and specialness of our practice. 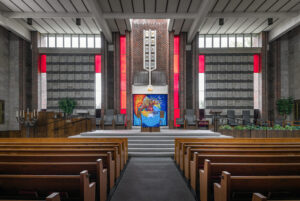 As part of her commitment to Hiddur Mitzvah, visual artist Elsa Wachs designed and created textiles to cover each Torah scroll in our ark.  Introducing the ritual textiles to the congregation, Ms. Wachs stated, “My intention with these Judaic pieces is to hopefully delight and provoke you, my Ohev Shalom community, to see life and prayer in a myriad of other ways.” 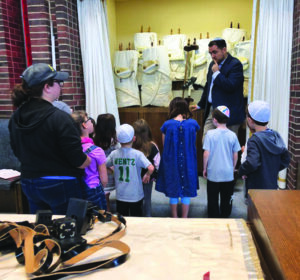 Ms. Wachs explained her contemporary, abstract design choices, describing the inspiration she drew from ideas about the “big bang” and the creation as described in Genesis.  “The sparks,” she said, “must have formed a blazing luminosity… those sparks keep reproducing. They have entered and will continue to impregnate every soul that comes into being, imbedding the sparks of the Divine’s Creative Energy.”  Ms. Wachs invited onlookers “to interact with this weave…a textured mosaic giving you visual prompts about the messages, blessings, and benedictions secreted within the folds and fibers.”

Importantly, Ms. Wachs also designed a special cover for our Loštice Torah scroll, which was among the surviving Torah scrolls that belonged to Czech Jewish communities devastated during Holocaust.  The cover for the Loštice Torah was dedicated on Yom Hashoah, 1979. This work was created as a memorial to the six million Jews who perished in the Holocaust and in particular to the Jews of Loštice, Czechoslovakia.

The Torah cover depicts arms clothed in prison garb reaching up to God in despair.  The Hebrew letters form the words AM YISRA’AYL CHAI: “The People of Israel Live.”  Rosebuds adorn the top of the cover to symbolize life, hope, and the beauty in the survival of the Jewish people. 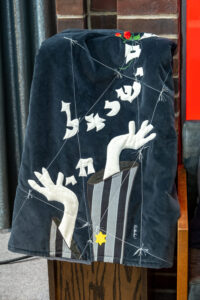 The Children of Israel Mosaics

In 2012, Rabbi Gerber, congregant Charlotte Snyder (of blessed memory) ceramic artist Heather Bryson, and designer Amy Pollack began discussing a new project to bring ceramic artwork to the Ohev sanctuary.  Over the course of their discussions, they arrived at the idea that eventually became The Children of Israel Collection.  The collection features twelve individual mosaics, each of which symbolizes one of the twelve ancient Tribes of Israel.  Two additional panels were also crafted, one symbolizing the Levitical priests who served in the Temple in Jerusalem, and one honoring Dina, the sole daughter of the biblical patriarch, Jacob.  All of the mosaics are displayed on the walls of the Main Sanctuary. 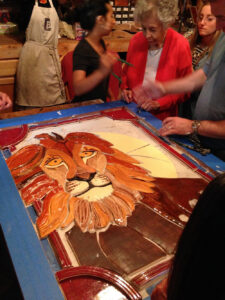 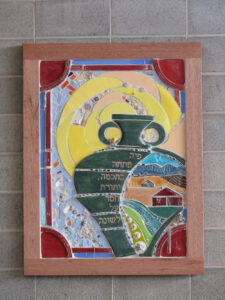 More than just beautiful, one-of-a-kind Judaica, our mosaic panels truly embody the meaning of community.  Over the course of nearly two years, congregants joined together with Ms. Bryson to create the artwork, a remarkable and symbiotic partnership between artist and community.  More than a hundred congregants contributed personal memorabilia, from apartment keys to military tags, grandparents’ jewelry to grandchildrens’ home-made mezuzot. The main images of the ancient Tribes symbolize our Jewish history, and embedded throughout the panels are personal keepsakes that symbolize our Ohev family. 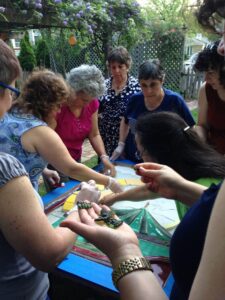 In 2019, artist Siona Benjamin came to Ohev Shalom for a weekend-long artist-in-residence program, and Rabbi Gerber and Ms. Benjamin began discussing the possibility of collaborating on an art installation.  Rabbi Gerber’s goals for the project were to add color to the Main Sanctuary and to pay homage to the Biblical character, Joseph, who was referenced only implicitly in the Children of Israel mosaic project. 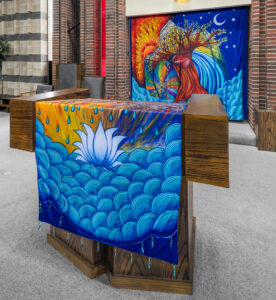 In September, 2020, just before the Jewish High Holidays, the new Ark curtain (parochet) was installed.  Ms. Benjamin drew inspiration for the Ark curtain from the complicated character depicted in the story of Joseph.  Young Joseph is depicted as immature, entitled, and naïve, but he matures into a clever and plotting but ultimately benevolent adult.  Reflecting Joseph’s complexity, the Ark curtain features a layered design that has numerous symbols embedded within it.

Accompanying the Ark curtain is a new cover for our reader’s table (amud).  This cover features two distinct sides; one visible to anyone standing and looking out at the congregation, and a second one, displayed for the congregation to enjoy from the pews.  Both sides have meaning and reference the Ark curtain.

When standing at the Amud, one looks down at branches sprouting from a central point.  The branches represent an extension of those on the Ark curtain to indicate that the Teachings found within the Ark extend to the table and then out to the congregation.  The branches of the tree on the Amud grow into seven distinct “buds,” which are also flames forming a menorah. 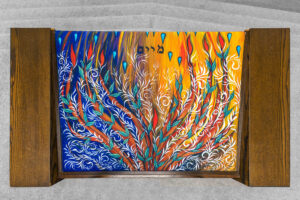 Painted water drops “trickle down” along the table cover, further representing how our Torah sustains us. In the center of this sprinkling, one can also see the word “Mayim” (מיים), which is the Hebrew word for “water.” In numerology, the letters of “Mayim” using this spelling produce the number 100 (40+10+10+40), meant as a celebration of Ohev Shalom’s Centennial, during which these objects were dedicated.

The central image on the congregation side of the artwork is a blue lotus flower. It may evoke a connection to the Ner Tamid, the Eternal Light, located in a straight line above and behind the table. The light of the Ner Tamid, in a sense, becomes a flower that opens up and spreads beauty and joy all around. The lotus also represents our artist, Ms. Benjamin, and her Indian Jewish heritage.  Despite growing up Jewish, she sometimes felt excluded from the “normative” Jewish community, especially in America.  It reminds us of the centrality of diversity, unity, openness, and inclusion.  All are welcome here, and all are part of our community. 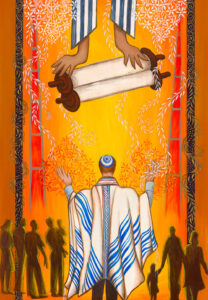 In 1980, Rabbi Louis Kaplan brought one of the 1,600 Czech Torah scrolls that survived the Shoah to Congregation Ohev Shalom, where it was first placed in the Ark during a Yom HaShoah service. That the scrolls survived at all is remarkable.  As Jews were fleeing the country or being deported to concentration camps after the German occupation in 1939, the scrolls had been collected for safekeeping, along with ritual objects, books, and archives, from synagogues throughout the country.  The mission to rescue imperiled objects was undertaken on Jewish initiative but with approval given by the Germans for reasons of their own (for eventual display of the fossilized remnants of a destroyed people).

In 1963, an American art dealer came upon the scrolls in a dank storeroom in a Prague synagogue. They were purchased with funds collected for the purpose and transferred the following year to the Westminster Synagogue in London.  The Memorials Scrolls Trust was established to oversee distribution of the scrolls to congregations around the world.

The scroll that came to Congregation Ohev Shalom was rescued from the town of Loštice (pronounced LOSH-tea-tseh), about 140 miles east of Prague, in Moravia, the eastern region of what is now the Czech Republic.  (Seventy miles further one reaches Pribor, the birthplace of Moravia’s best-known Jewish native son, Sigmund Freud.) The town now has a population of 3,100, none of them Jews, though Jews have a history in Loštice that is documented back to the sixteenth century. The Jewish population rose and fell over the centuries, growing to 438 by the mid-19th century, but by 1930, well before the German occupation, only 55 Jews were left in the town. The list of Jews deported from Loštice to Terezin and the death camps includes 56 names from 22 families. 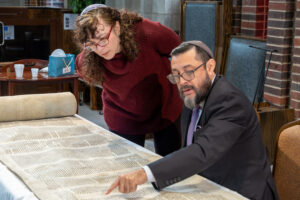 Congregation Ohev Shalom engaged the services of a Jewish scribe (Sofer) to restore the Loštice Torah scroll.  In 2020, many of our congregants gathered in the Main Sanctuary to participate in the restoration. 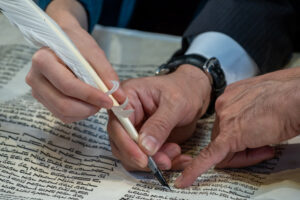 Ohev Shalom’s scroll is housed in the ark of the synagogue’s main sanctuary, where it is covered by a memorably powerful Torah scroll cover designed by congregant-artist Elsa Wachs.

Megillat Loštice: A Scroll of Resilience

“Now go… inscribe it on a scroll, that it may serve in the time to come as a witness forever.” – Isaiah 30:8

A symbol of the unbreakable, indestructible spirit of the Jewish people exists inside our Sanctuary Ark at Ohev Shalom.  We are the keepers of one of the 1,500 Czech Torah Scrolls that were rescued from Nazi destruction during the Holocaust.  Our 200-year old scroll, from the Moravian town of Loštice, survived a miraculous set of circumstances to eventually find a new home in Wallingford, PA.

The Jewish Tradition urges us to study, internalize, and teach our history… and above all to learn from it.  Ohev Shalom has once again collaborated with the renowned artist Siona Benjamin to craft a four-chapter, hand-written, beautifully illuminated scroll to tell the story of how our Loštice Torah came to us. It is a modern-day Megillah that will enshrine the tale of this unfathomable journey, and which will be read annually at our Loštice Shabbat celebration.

Not only does Megillat Loštice teach about a lost Jewish community and the vibrant world surrounding it, but also inspires us today to think about our own need for resilience, perseverance, and overcoming obstacles.  Though it also commemorates loss and destruction, our Megillah is ultimately a tale of hope, survival, and life, that will indeed serve as a witness for our community forever. 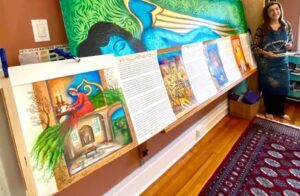 The stained glass window in our chapel was designed and created by Bryan Willette, an artist and glass painter with Beyer Studio in Philadelphia.  It was installed in January, 2019 and dedicated to the memory of Andrew Spector.  This translucent Tree of Life enhances our prayer space with color, beauty, and light.  The image of an olive or orange tree is a symbol of peace and bounty in the Land of Israel.

Hidden in the tree is a small mockingbird, a reference to the classic novel To Kill a Mockingbird, and its depiction of the mockingbird as existing solely to sing and provide joy to the world.

Hebrew words and their English translations are embedded in the glass.  Each word describes an aspect of Andrew Spector’s life, and is meant to evoke meaning for the onlooker as well.

Our building has the capacity to accommodate both small groups and large parties. Private meeting rooms and classrooms are available for more intimate gatherings, and our newly-renovated entertaining room (60’ x 80’) can easily be arranged to comfortably sit more than 600 people auditorium-style or 300 people for a meal – plus a dance floor. The room can also be divided to provide separate areas for reception and cocktails. 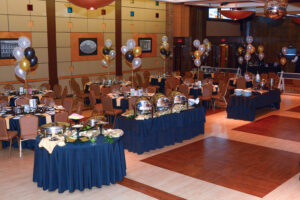 We have a kosher kitchen that can only be used to prepare kosher food. If you are having a catered affair, we have a list of approved vendors that are more than happy to work with you as you plan your event.

Our beautiful sanctuary seats 275 guests, and we have a warm and inviting chapel available for smaller services.

No matter what the occasion, contact us to discuss how Ohev Shalom can meet your needs.