Rabbi Kelilah Miller has been with our congregation since 2015.  Rabbi Miller grew up participating in the lay-led prayer group (chavurah) within her synagogue, and her approach to prayer and leading prayer are rooted in her experiences there.  “As soon as I became a Bat Mitzvah,” she says, “I was expected to take my turn on the bimah…The gentle coaching I received from truly inspired prayer leaders, and the trust that my community placed in me at a young age, gave me a powerful sense of ownership of and embeddedness in the tradition.” 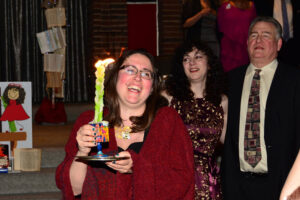 Rabbi Miller focuses on the relational aspects of leading prayer, and says that “a powerful prayer experience is always a partnership between the congregation and the leader – the spiritual energy of the prayer comes from the group, and a skilled and attuned leader can channel that energy into something that is far greater than the sum of its parts.” 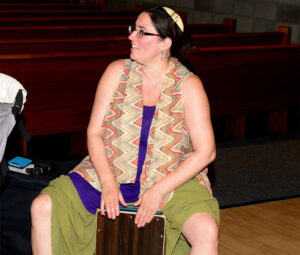 “It is important to me as a leader of prayer,” Rabbi Miller says, “to embody and interpret the traditional forms while also building a spiritual space that is accessible to those who have less experience or technical knowledge.  The most effective tool for creating this kind of welcoming space is music and melody.  I have recently been working with a group of congregants to deepen our experience of singing wordless melodies (niggunim), and to more fully incorporate the spirituality of ecstatic singing into our communal practice.” 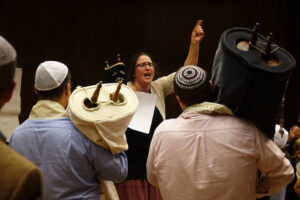 Rabbi Miller stresses that even the most traditional forms of Jewish prayer can encompass many theologies, and notes that over time, Jews have envisioned God as having wide variety of forms and functions.  “Our spiritual and moral imagination has had centuries to develop, evolve, and experiment. It is also true that many Jews do not describe ourselves as classical theists at all, and some of us are adamant atheists.  It is my belief that Jewish prayer can be inhabited and animated by any/all of these approaches to God, and that when we pray together across our theological differences, we create something beautiful and nourishing.  The poetry of prayer is not a binding declaration of literal belief, but rather a springboard for relationship with the questions and insights that lie at the heart of the human experience.  There is nothing more thrilling than plumbing the potential of that relationship together.”